'Ether is all that is'

To G R Iranna, Ash, in substance, presence or essence implies both an artistic as well as a conceptual engagement. This is not just a sudden addition into his oeuvre, but an organic extension of his predilection towards tactility of his mediums on a scale that is larger than life. Here Iranna is drawn to using ash along with charcoal powder and powdered pigment, as he tenderly overlays the harsh surface of tarpaulin, while merging its p... read more

'From Ash to Ash' 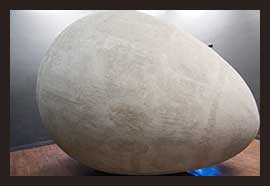 The mathematical symbol “ ∞ ”, essentially formed from the union of 2-egg shaped forms, is used to represent a potential infinity. While the symbol itself has an embedded circularity of form, it denotes the formless. The egg-shaped womb, is... read more