Between Perplexity and Dream 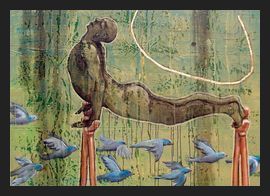 The naked and tonsured figure that serves G R Iranna as his key image is compacted from many ancestries. It fuses the yogi, the bhikshu, and the tirthankara, exemplars of transcendence drawn from Indic culture’s three major sacred traditions; in more secular key, it also encodes references to Gauguin and Bacon, the exponents of the Jorasanko circle, and the android martyr-saviours of science fiction. Such intertextuality is integral to Iranna’s logic of figuration, which engages vigorously with the human body cast in situations at once archetypal and political, suggestive of a deep archive of ceremonial physiology but also memorialising the present.

In his current work, foetus and pharaonic demigod morph into prisoner and refugee; the  sequence of hominid evolution doubles as a scale of moral choices. Far from remaining enclosed in a heroic Modernist isolation, Iranna’s single figure implies and even actively summons a sociality into being.

An unmistakeably autobiographical note sounded through Iranna’s works during the late 1990s, when he developed such protagonists as the yogi meditating among cattle, the questor traversing landscapes punctuated by ploughshares, lamp-columns, tree-stumps, chain-hooks and phallic horns springing from trapdoors. Updating M F Husain’s ‘Zameen’ (1955), Iranna substituted the master’s idyllic folk-Romanticism with an awareness of the catastrophes of ecological degradation and peasant immiseration, the destruction of communities, environments and entire lifeworlds by the engines of discompassionate progress. Iranna, it must be remembered, was born in the village of Sindgi, in the north-Karnataka district of Bijapur, in 1970; as an art student, he moved beyond the ambit of his Lingayat farming background, going first to Gulbarga, then to Delhi (where he now lives and works) and London.

Following in rapid succession, these shifts called up the young artist’s reserves of adaptability: they enriched his consciousness yet surely also generated an existential unease. We may justifiably interpret the recurrent figure that negotiates an estranged and estranging environment in Iranna’s paintings as an oblique self-portrait: a figure that confronts obstacles and practises new reflexes; that assumes the likeness of a child or a Bhishma-like figure lying on a bed of springs, instead of arrows. During the late 1990s, Iranna also  attended to the formal problem of establishing a significant relationship between this compelling figure and its ground, variously activated as a field of occupancy, illusionistic backcloth or allegorical landscape. In defining the ground, Iranna celebrated his Klimt-like love of pattern for itself as often as he deployed it to rephrase the natural as a sumptuousness, the paintings clothed in a skin of jewelled gold.

Iranna’s accomplishment, in the present suite, is to extend his investment in the figure considerably, in terms both of pictorial inventiveness and metaphorical charge. His aims are twofold: first, to consolidate the archetypal figure as bearer of existential crisis, and second, to restate the relationship between this figure and a versatile ground characterised by sensuous plenitude as well as menace. Typically, the relationship between figure and landscape takes the form of perplexity and dream in these new paintings. Iranna’s figure tests its limits, probing and gauging its surroundings, measuring the possible resistance that a wall, a water surface, the air, or a staircase might put up, wondering whether it should disturb the world’s equilibrium with movement. The protagonist of ‘Pendulum’, for instance, incarnates indecision, teetering at the edge of a springboard, hands clasped behind his back. His avatar in ‘Untitled’, likewise, stands on a springboard, offering us a three-quarter profile: he sizes up a wall striated with rich bands of red and gold, and studded with gravity-defying teacups and saucers, their bizarre near-realism punctured by drips of paint. Looking closely, we find further ironies of illusionism: the painting is threaded together by handles, loops of rope that thread in and out of the wall (or backcloth, or ground?), casting shadows that induce an Escherian imbalance in the viewer.

Iranna also multiplies the single figure into a dyad or a group, an ensemble that combines labour with  felicity, elaborating its shared perplexity through the performance of cathartic dramatisations. In ‘Chorus’, we encounter two figures (or a self and its image?) screaming silently, running away from a catastrophe, as bricks explode, float and fall. This is a slow-mo echo of iconic Vietnam images, but before we can become emotionally involved, we realise that the entire scene is maya, a screen pegged on a clothesline, a painting fluttering in the wind within a painting. Similarly, the format of the rogues’ gallery provides the ironic model for ‘No One’s Face’, which assembles a series of partially effaced portraits – the dreams of the figure sleeping at the base of the work, or the opportunities missed by the shadow-smeared figure climbing a flight of shallow steps. Iranna alludes here to the enforced anonymity of the collective, viewing society as a prison of roles prescribed by dominant but invisible forces (he leaves it to us to identify the habitus: the tyranny of surveillance in a command economy, or the spirit of conformism in a mediatic consumer society). In a polity of clones, what is the real; in a hall of mirrors, which of the reflections is the original; where does the object end and the shadow begin?

Iranna puts the device of the shadow to salient use in this series, using it as an illusionistic trigger but also as a tenebrous cloud of doubt accompanying the outlined figure, casting its musculature and purposiveness into doubt. The mysterious ‘Walking on Shadow’ appears to be the vision of the figure asleep in the upper band of the composition; its protagonist slouches, as through rain or glass, a smear of shadow and body. For a split second, when Iranna promotes such an illusion, the shadows render his beautifully painted and detailed surfaces solid. Indeed, in activating the scenario, Iranna’s shadows urge us to recognise the  beautifully variegated, palpably sensuous and tapestried surface, the manner in which it generates an erotics of friction, having been painted in acrylic on a base of tarpaulin – a rough trucker’s medium, used to wrap goods on the long-distance coaches and trucks that link India’s far-flung regions?

In Iranna’s usage, such a surface marks the transcription of desire veined with anxiety: it proposes a  resolution to the perennial antithesis between figure/self and ground/world, by dissolving their apparent duality in a relational understanding, one that places both in a circuit of continuous interplay. In ‘Bouncer’, for instance, Iranna orchestrates an interrelation between the self-absorbed figure bouncing on a pair of springs, and a ground detailed in a myriad floating eyes: the figure is imbricated into the ground with a rain of paint dribbles, its movements graphed over the ground in Muybridge-like flickers, its foetal crouch-and-release paralleled by the tornado-like ascension of a spiral facing it. I would tentatively describe this pictorial resolution as a figural landscape. No semblance of the natural, it is a trope deliberately composed from annotations: it simulates an original that is a reality of affect, not a material reality. In a period that has registered the ascendancy of critical artistic strategies that unmask and dismantle, G R Iranna stands apart by espousing an art of affirmation, of measured additive procedures and philosophical reflections.