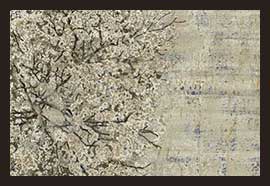 To G R Iranna, Ash, in substance, presence or essence implies both an artistic as well as a conceptual engagement. This is not just a sudden addition into his oeuvre, but an organic extension of his predilection towards tactility of his mediums on a scale that is larger than life. Here Iranna is drawn to using ash along with charcoal powder and powdered pigment, as he tenderly overlays the harsh surface of tarpaulin, while merging its presence into his muted colour palette. Some years ago, he began to indulge the blackness of coal powder along with the raw, grainy touch of charcoal, exploring its affinity for impermanence, suitably evoking human vulnerability and fragility of life.

The dispersed nature of ash, its colourless, odourless and formless presence is at the core of this serene exhibition that is summed up in a beautiful Upanishadic thought- ‘all that now is and all that is not.