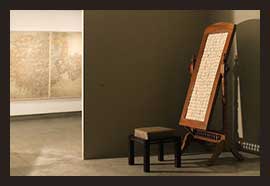 For even the most ingenious of artists to combine diverse elements, such as man, king, old monuments, fragrance, charcoal powder and pigment, into a single canvas space by using ash as the medium of execution, would amount to lunacy. Yet this potpourri of mediums and resources is just what artist G R Iranna has dramatized into his interpretation of art at his latest showing at Gallerie Espace, where the void like sparseness lends itself to creating the right mood for showcasing of his attempt at suggesting: ‘Ether is all that is’.

Comprising a series of large canvases in subdued tonal configurations of ash, charcoal vibhuti powder and hint of red pigment, these works depict tree forms from an aerial angle, a mirror frame boxed with vibhuti cubes, a stretch of canvas grooved with horizontal geometry and even a ‘carpet’ of these mediums into a delightful potpourri destined to awaken the inner soul of the viewer.

Thus a forthcoming Iranna is ever willing to take his viewers on a gallery tour of the works, thereby reliving the entire process of creation which he has likened to life’s journey in terms of an implicit fragrance and consciousness that he unravels through its many layers. At the first halt before an aerial view of a full grown tree sprawling across the canvas in resplendent glory, one soon realizes the futility of imagining the predictable. The form coagulates into an abstraction of silver and metallic daubs that bridges man and the soul and before long, the inner silence begins to gain a voice through the many thoughts racing through the mind, when one hears the voice of the artist deciphering the mood vocally: ‘I create tree/ nature as myself. I see myself in the object – the tree – as also myself as a human being,’ thereby divesting the work from being a pure abstract into a formatted personal statement, exhibiting the joy of a free spirit reined in by the artist.

With the mind still preoccupied, the artist draws attention to a mirror, its surface consciously fitted, like a jigsaw puzzle, with cubes of vibhuti which speaks volumes of its philosophical configurations. ‘I conceived it from societal practices, where the application of vibuti is a morning ritual in a somewhat mechanical style. But ash acquires an entirely different connotation when a man dies; when it becomes a formless holiness and that is the meaning I want to capture in this mirror frame. ‘While the mirror taken in isolation is a symbol of beauty, joy and happiness, when treated as the container for the formless consciousness, the mirror becomes the conduit for seeing ourselves as ash,’ he surmises.

Advancing the tracery of ash to the next level, in the everyday existence of our lives, the artist concedes to exploring the language of colour pervading an otherwise pristine canvas stretch of the signature ash, in his work entitled ‘Ethereal Tree’. While the form is by now familiar to the onlooker, it is the layered colourations of browns, reds and gold , inspired from the undulations of classical music being presented through a vocal recital, that the artist has emulated on his art surface. The multi hued tinges that peep through the ashy spread are commentaries of modern-day living, rife with politics, chaos, the ever constant cycle of life and death, of which the ancient tree is a silent witness. The entirety of ash as its creative formulation is a reminder of the biblical principle of dust thou art and to dust thou returneth.

But the masterpiece in this giant conceptualization around ash is not restricted to a single form but is floated in a parallel concept of life, conceived as an eternal journey, depicted through a series of horizontal grooved lines on the canvas, with slight deviations on the rigorous linear surface. The controlled visage with its unpredictable yet definitive undulations, aptly portrays the ups and downs that each of life’s journeys throws up along the way. The subtle crookedness of these distortions in an otherwise severe regularity of parallel lines, excites the mind and triggers the imagination to voice our thoughts in a language of our own making.

Elsewhere, juxtaposed as a mirror image, and snugly tucked into a corner space, are a pair of ornamental studies capturing the overall mood of the ethereal concept. The surfaces of the ash-painted pair, glow subtly with their glinting details making for an entirely new medium for expressing artistic ideations. Practically, they duplicate the scientific principle of gravitational energy, while spiritually, they serve as reminders about the consequences that follow in pursuit of our deeds.

Diagonally opposite to this formulation about life’s journey, is yet another of Iranna’s artistic commentaries arranged spatially at ground level, and as a floral carpet of vibhuti blocks. Here the design element reflects an attempt to showcase the ornamentation of the hand woven craft original, into an item of artistic ingenuity. On an in-depth level though this puzzling assemblage of vibhuti blocks, akin to a child’s building block toy set, becomes a commentary on the complicated and intertwined character of the times we live in.

Attracted by the sounds of soulful chanting while one gazes j0yfully at the vibhuti carpet on the ground, one is drawn to the final installation, depicting a line of scripture. The distinct letters of the script emit a fragrance as it slowly smolders down to ash in the course of a day, and the soft smudging of the strokes and lines of the verse relive the doctrine of formlessness that is the inherent nature of all matter. Thus it is the ethereal nature of the show, delivered through the fragrance of residual ash that binds thought, art and form into a holistic schooling, by its creator. The seeds of this idea, according to the artist, were traceable to his childhood which was nurtured along conservative and grounded lines. The furtherance of this thought process enlarged his artistic strengths and after a half decade of deep meditation around the concept, claims the artist, it has effloresced in the form of the present showing of ‘ether is all that is’.

Subhra Mazumdar is a senior art critic, curator and writer. She is based in Delhi.