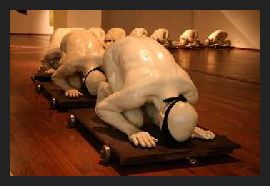 In what is clearly a tour de force of protest art, a masterpiece of social commentary, Iranna shows us the human truth of our times, shows us how far man has fallen: abject and anonymous, stripped naked and emasculated, his figures squat submissively, like dogs waiting to spring up and do their master's bidding. They are lined up in rows, and-the crowning touch, brilliantly simple-their heads are shrouded in plastic, effectively muffling,even suffocating them: they dare not speak out, dare not protest their servitude, dare not stand head held high and proud.

The base of the Statue of Liberty in New York's harbor is inscribed with Emma Lazarus's famous words: “bring me your huddled masses.” Here they are, says Iranna, in all their blind conformity,unaware of their unliberated condition, their stifling nothingness. A few plastic containers of water are placed among the figures, a bare necessity of life, the minimum needed to survive, ironically emblematic of the barren character of their existence. Indeed, Iranna's sculptural installation is fraught with devastating existential truth as well as unflinching consciousness of mass society.The plastic head covering and plastic water containers are mass produced, and convey the “plastic” or fake character of modern industrial society. Thoreau famously said “The mass of men live lives of quiet desperation”: Iranna has pictured that anxious quiet ismthe anxiety seems implicit in the bent bodies of his figures with devastating clarity.

I detect other meanings in the sculptural installation. Iranna's paintings Soldier in the Womb, 2000 and The Last Voice,2006, depicting a soldier making the Nazi salute, afford a clue: the installation figures, naked as though just born does the wrapping around their heads symbolize a caul, ambiguously a sign of good and bad luck?--are soldiers in the making, disciplined and obedient to the “master race” soldier in The Last Voice, and needing his uniform to be “complete.” He is their implicit model; wearing his uniform, they too will make the Nazi salute. They already look like him:he and they are one and the same figure, repeated ad infinitum in the installation, gloriously isolated in The Last Voice. Iranna uses a basic “modular” male figure, white skinned and with silenced consciousness, making him emotionally as well as physically one.

The homogeneous installation figures have been censored into conformist muteness--the impassive silence the matized in the painting Silencer,1998, the ironical sculpture Silence Please, 2005 (announced over public loud speakers, held like traumas in the hands of the figure), the painting The Story of Five Gentlemen, 2006, and the two versions of the sculpture Silencer,2005 and 2006, in effect a depiction of the blind leading the blind. Theirs is not the pure silence of absolute inwardness the silence celebrated by Odilon Redon and the Symbolist poets--but the impure silence of self- and social repression: the humiliating silence of being at loss for words with which to protest one's lot in life, indeed, to use one's inner being to counteract one's social oppression. Iranna's installation figures have none they are an innovative rendering of hollow mass man, systematically organized into a lonely crowd. The head covering of the installation figures is a symbol of personal loneliness as well as socially enforced silence a symbol of the loss of the power to communicate one's feelings (even to know them) in defiance of a society that puts one in one's subservient place, a self-deprecating place one willingly takes, which is the ironical point of The Story of Five Gentlemen.

The installation figures await the uniforms that will make them soldiers, while the The Last Voice depicts the stages of becoming uniformed, that is, a full-fledged military man. The naked recruit of the first stage puts on military boots and cap in the second stage. In the third stage he is outfitted with a tunic, and in the fourth stage he wears pants, his uniform finally complete. He is ready to take his place in the military machine. Design for Two,2003 makes a similar point: a naked man his spirit already broken--and uniformed soldier with a weapon appear side by side, the alpha and omega of the militarization process. The naked male figure in both paintings resembles a spiritless paper doll from a children's cutout book. He no doubt has civilian clothing,but Iranna shows him in military clothing; Iranna is playing with toy soldiers.

There is in fact a robotic feel to Iranna's figures, however obviously organic and anatomically accurate the installation figures are. (They look as though they have been cast from a living person, and then depersonalized into anonymity by their head covering and mechanical repetition.) All of Iranna's military figures are symbols of instrumental reason at its most uncompromising. Seemingly invulnerable, his toy soldiers may be lemmings marching to the sea of death, but their discipline and orderliness make them symbols of the relentless, seemingly unstoppable power and momentum created by machine-like uniformity and standardization. The military machine is technological mass society at its most absolute and triumphant.

But Iranna knows that there is flawed, vulnerable human body underneath the uniform that seems to confer invulnerability.The painting Man Made by Flesh and Bone,2005 and the sculpture Make Sure You're Breathing,2006 make this clear: nakedness becomes the military man's Achilles heel in these works. Without the uniform that gives him social authority and confident power,the military man is just another raw body. Here is another meaning: without his pants on, one sees his impotence. His uniform gives him phallic power: he stands erect. To strip him of his uniform is to show his limp penis clearly visible in many of Iranna's pictures. Naked he decays into a bruised shadow,and shadow is a form of death living death. Even the strong military man, holding his own in his uniform, is powerless against death, which strips us all naked.

No longer part of a military organization, Iranna's figure experiences the existential agony of isolation. Many of his paintings depict troubled existential man, perhaps most note worthily Looking for Land,2004, a brilliant invention of a male figure stretched in space, his hands and legs precariously supported by crutches; ManninaKaya,2003, where two male figures, each the mirror image of the other,stand with one foot on a red stool, their eyes closed, as though pondering,in a position reminiscent of Rodin'sThe Thinker,the fate of humanity; and PrayerII,2006, where a figure, his head downcast, is suspended in space like Christ crucified. In all these works the naked figure isa murky shadow, paint sometimes dripping from itlike blood from a wound. The naked male body appears again and again in Iranna's work; whether white or dark British oppressor and Indian oppressed? it suggests a crisis of masculinity,uncertainty about the meaning of masculinity. Iranna uses expressive nakedness to debunk the inexpressive uniform, and with that the military ideal of masculinity,but the naked body expresses despair again and again perhaps nowhere more excruciatingly than in an untitled 2005 painting of a single figure, kneeling and self-effacing,his head bent to the earth, his body seemingly carrying an invisible burden (is he Atlas unable to sustain the weight of the world, which has fallen at his feet, as the schematic scene of buildings in the shadow below him suggests?).But every so often the body is represented with a token of salvation, as in Promise,2006, where the gloomy gray figure wears a halo-like crown of hope.

Iranna's figure, whether existentially expressive or a social robot, reveals his insight into that self-estranging kind of suffering called being part of the masses: the suffering born of compliance, symbolized by membership in the military,with its demand for blind, unthinking obedience. Iranna's emblematic figure may be the enforcer of the British Raj that once ruled India or else a symbol of the Indians he ruled, but whether representing the ruler or the ruled (master and slave, as it were), he represents the closed system in which both are mindlessly entrapped. The point is made decisively in Iranna's painting of a row of crouching naked figures, their heads shrouded in blue drapery,their bodies positioned between barbed wire fences: to be one of the masses is to be imprisoned, and not to realize it.

This striking image conveys a number of meanings: the figures are as closed to life as the enclosure in which they are confined. The head covering suggests their emotional inhibition as well as the mindlessness enforced on them by their imprisonment. The space in which they appear is narrow and fixed, and they form a narrow row of rigidly aligned, schematically simplified bodies. Similarly,the blue shrouds covering the heads of the football players in another painting signal the same lack of social awareness and, concomitant with it, of self-recognition. The result is the facelessness of the unwittingly entrapped. A football player is a mass-produced instrument in a socially defined game a game with very strict rules of behavior,like the military--rather than an individual and person. The football game is in fact often described as a sort of military event, the two teams battling each others, blind to everything but winning.The British empire was supposedly won on the soccer playing fields of Eton, and the American military routinely uses football metaphors football is an American game to conceptualize its battles. Agameisa social trapa sort of prison and ifone breaks the rules one isout of it, confirming that one isa non-person, that is, does not exist, apart from the social game. Football players are in fact disciplined robots ordered into military formations like soldiers.

I want to emphasize the expressive absence of Iranna's football players, prisoners, soldiers. Football players of course wear uniforms, and the nakedness of Iranna's figures becomes a uniform by way of the uniformity of their appearance. Itbegins to look like a regulation outfit by reason of their mass regulation in rows. Only when they are thrown out of the game and must live alone apart from the teamlive in the limbo that isthe emptiness of Iranna's grand space--do they acquire the expressive resonance of a living person: what they have lost in social power and authority,they gain in emotional power and authority.The inconsolable melancholy of the face in Homage to Monsoon,1998 makes the point decisively.The face's mournfulness and suffering inform the texture of the tarpaulin on which itispainted, the way the pathos of Christ's face informs the texture of the cloth with which St. Veronica wiped the blood from itas he went on his way to Golgotha.

Iranna's tarpaulin paintings are implicitly narrative murals, as their often huge size and grand themes suggest. Tarpaulinis“a sheet of waterproofed canvas or other material used as a protective covering for objects exposed to the weather,”as the dictionary says, and Iranna's tarpaulins have been weathered by paint. Iam suggesting that even when he uses acrylic and oil, or acrylic or oil alone, on ordinary canvas, the surface looks like ithas been hit by a storm of paint rather than civilly painted. The expressionistic urgency and textural irregularity defy the regulating control of the social system exemplified by his rows of muted figures, naked or clothed. Iranna's images show us the repressive social system and its dehumanizing effect, but his paint has expressionistic urgency and “personality”by way of its textural and humanizing excitement. Even when he depicts, in an untitled 1999 work involving aluminum on canvas, with its exquisitely drawn Buddha at the moment of enlightenment the work isflooded with light, layered over a foreboding shadow--the surface isingeniously activated, all the more so because itisspotted with nodules of concentrated luminosity.

The theme isa rarity in Iranna's oeuvre, suggesting that Buddhism isits secret root. The contrast between the detached beauty and tranquil sacredness of the radiant Buddha, as distinct from the oppressive silence, morbid rigidity,or ominous darkness of Iranna's other figures, all unenlightened and social invalids one way or another, is certainly startling.The Buddha taught that attachment isthe root of suffering,suggesting that Iranna's usually morbid pictures are an attempt to work through the suffering that comes from unthinking attachment to profane society, a well-run prison that to the unenlightened mind looks like a game.