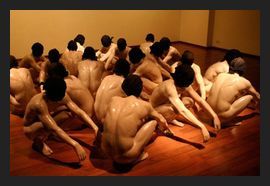 Iranna G.R. interrogates the culture of violence in a recent exhibition, Birth of Blindness. They carry with them resonances of Abu Ghraib — these crouching, naked white figures, their heads covered with black hoods. Subservient and stripped of all dignity, they are the new protagonists of Iranna G.R.’s solo show “Birth of Blindness”, which travels to the Aicon Gallery in London and New York after a brief preview in New Delhi.The exhibition appears to break new ground in the artist’s oeuvre not only in terms of treatment of material but also in terms of the commentary it makes.

I am sorry for those people for they are being misguided. But it is society that has made them what they are and so I too am responsible for their actions.

The artist endorses the idea. “Earlier my works were more aesthetic and philosophical in nature. They were more abstract. These works have a social and political narrative. I have used them as a chance to connect to history.” Like many of his contemporaries, Iranna’s present work is marked by the events that unfolded post 9/11 including the invasion of Iraq. His visual vocabulary has been largely influenced by the violent images that he sees beamed through television or splashed on the pages of the print media. It is this culture of violence that he interrogates in his current suite of paintings and installations. His emasculated figures in “Birth of Blindness”, genuflecting in blind servitude, can be read as metaphors for the perpetrators of violence who blindly follow the instructions of their political or religious handlers.

But Iranna treats his subjects with a great deal of empathy. He is conscious of the fine dividing line between a terrorist and a freedom fighter. He is aware that violence is often resorted to when the legitimate aspirations of a people are not met. “I am sorry for those people for they are being misguided. But it is society that has made them what they are and so I too am responsible for their actions.”

Iranna has long used the human figure as a site for his artistic explorations. Earlier, this took the form of a self-contained and introspective naked, tonsured mendicant. The 37-year-old artist hails from a Lingayat farming background in Bijapur, and his works in the late nineties referenced his rural affiliations. His acrylic works on canvas or tarpaulin often depicted a yogi meditating in a field or surrounded by cattle and farming implements.

His works in the early part of this century have taken a more philosophical turn. The suicide of a close friend forced him to confront the issues of existence and mortality. Grappling with the existential questions of life and death, he has dwelt on the transience of the material world and the impermanence of the body/human figure. Symbols of a horse, a chair or an umbrella have often cropped up in his works to denote royalty or the trappings of power, which ultimately serve no purpose in the afterlife.

The masked and blindfolded figures that populate his paintings now have arisen after a great deal of examination and self-doubt. Iranna reached a stage where he felt he had exhausted all the possibilities of the human form and was scouring for ways to develop a new narrative. Some of the seeds for this body of works were sown in earlier installations like “Silence Please” or “Silencer”.

Done in the aftermath of the Gujarat riots, it showed the voices of normal citizens being stifled by a brutal state machinery.

Unlike the confused and directionless protagonists that one espies in his show, Iranna himself seems to have finally regained his footing.

His works make a confident and compelling statement on the exploitation and degradation of the human figure and mankind.